Benefits of Breastfeeding You May Not Know

The decision to either breast feed or formula feed your children is such a personal decision. I have personally done both and they have both had their benefits (and cons). With my first son, I will admit I was scared- breastfeeding was so hard and I was so tired (I was also doing my undergrad degree at the same time) and I just caved in and chose to formula feed him.
When my second child came along, I was determined to make breastfeeding successful. I researched as much as I could and I learnt all of the positioning skills before hand (I know this sounds silly but after not being able to the first time – technique really does make a huge difference!).
I LOVED breastfeeding my son. It was such an incredible bonding experience with him and I am so happy that I made that choice. I also loved all the benefits that came along with breastfeeding that most of you are probably well aware of, that include:
1) Early milk (colostrum) is full of rich nutrients and antibodies.
2) Breast milk changes as your baby changes (how awesome is it that your body can pick up these changes and change to accommodate your child’s growing needs).
3) Breast milk is easier to digest.
4) Breast milk helps to fight against infections.
Some other benefits for parents are that it really helps to save money (formula is not cheap at all) and it makes life easier (no checking temperatures, no measuring and no mixing!).
I was on Facebook yesterday and saw an interesting post on using breast milk for skin care, etc..and I was quite surprised that people were not aware of all the added benefits of breastfeeding!. With my second child I learnt so much from my RN and lactation consultant and found out that breast milk can also be used for:
1) Baby acne: continue to clean with warm water but afterwards put some breast milk on the affected areas and in a couple of days it will be clear (my son had the worst acne and we tried everything the doctor said. We used my breast milk and within days it was cleared).
2) Scratches: those big, red scratches that babies are good at giving themselves – rub some breast milk on it and it will take away the redness and not leave a mark.
3) Nasal congestion: forgot trying to measure out saline and trying to drop it in their little noses – squirt a little bit of breast milk into their nasal passage and suction it out.
4) Eye infections: Put a little bit of breast milk on the affected area of the eye until cleared.
5) Ear infections: I have personally never tried this but have been told it works! Put breast milk into the ear canal that is affected until healed (I personally would still take my child to the doctor to have them evaluated especially if they have a fever as you can never be to careful in their first year of life!).
6) Eczema: My youngest suffers from eczema on his cheeks, back and stomach and a few drops of breast milk would always clear it right up.
Some people even use it on their own acne, mosquito bites, eczema, etc. Have you used your breast milk to help heal any of these common ailments? 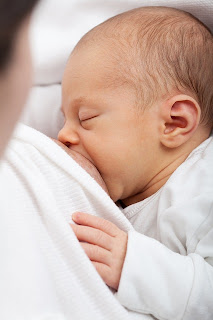 This entry was posted in parenting.