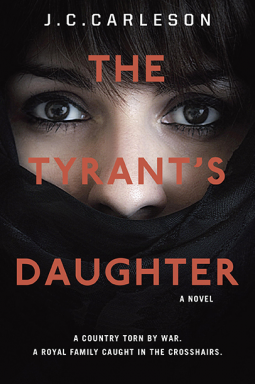 The Tyrant’s Daughter written by J.C. Carleson, a former CIA officer, follows the account of a royal Middle Eastern family exiled to the American suburbs.

When 15 year old, Laila’s father is killed she flees from the war torn middle east to a life of anonymity in the U.S. Gradually she begins to adjust to a new school, friends and culture but while she focuses on her new life her mother is focused on the past. Her mother is conspiring with CIA operatives and rebel factions to regain the throne her family lost. Laila feels torn as an international crisis begins to shape around her but is conflicted on what one girl can do to stop a conflict.

The Tyrant’s Daughter was an incredibly powerful and moving novel. It allowed us to see inside the world of a young girl who is on the verge of womanhood and trying to discover her own place in the world. She is torn from the only life she has ever known and placed into the safety of unfamiliar neighbourhood. She slowly begins to see her family and the people she knew back home in a different light as she is allowed to use the Internet for the first time – is her Father the man she thought he was or the one portrayed on the Internet?. Being immersed in a new culture so different than her own allows her to understand herself better and at times embrace her own beliefs stronger. Everything from gender interactions to food to clothes is so different then anything she has ever experienced before.

The novel gave such a different perspective of politics and the effect it has on the families of those involved. How the decisions their loved ones makes effects them and so much more.

A definite must read! The book is meant for young adults but I found it perfect for my own age group as well.

« Oddsoks for Storypanda #Review
The 30 Day #BeatTheFlu challenge with A.Vogel »
View more posts from this author